by The Street Phantom 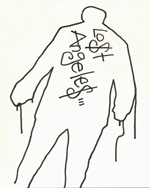 The Street Phantom is the voice of his generation. The spirit of the time. You have seen the anonymous Street Phantoms work before - Stark silhouetted body figures with provocative text such as " Art Saves Lives" and " Looking for America." These highly politicized street spectacles address post-apocalyptic urban decay and contemporary social issues, responding with charged timely phrases that confront problems of our day such as AIDS, racism, domestic violence, censorship and media alienation. The Street Phantom uses urban walls as a canvas for commentary of political  expression. 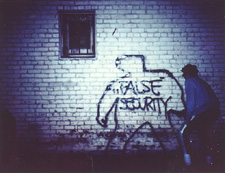 The Street Phantom is the spokesperson of our time, effecting change through mobilizing individual activism. The artist coins political phrases that reach out to our generation in need of a voice of representation. The elusive street artist comments on our social conditions by voicing thoughts of a personal and intimate nature which transcends cultural prejudices.

The LA Times calls the Street Phantom, " King of the Night." Arena Magazine says the artist is, "The shadow of the times". Rage against the Machines MTV 1996 award winning clip "Bulls On Parade" has received international recognition. Other appearances include in Video: U2  "Where the Streets Have No Name", New Order, Steve Earl and Concrete Blond, Soul Asylum's appearance at the MTV 1994 Music Video Awards. Lollapalooza II and IV. Movie credits include the Documentary Graffiti Verite'; feature films Lost Angeles, Colors, The Living End and Point Break. 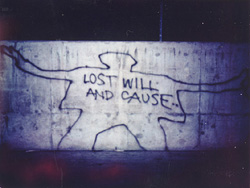 The Artist believes in effectively raising a level of social conscious and personal inquiry through usurping the power of mass media as a vehicle for awareness. The Artist chooses to speak to the psyche of our nations alienated youth, representing a generation in search of a sign.


ART SAVES LIVES 1998
Thanks again for thinking of me,
The Street Phantom

Send comments or suggestions to bryworld@aol.com